So with all my work on the Hugo websites it occurred to me that this site could use some love. It went through a major redesign last year, but the back end was still in the last century. 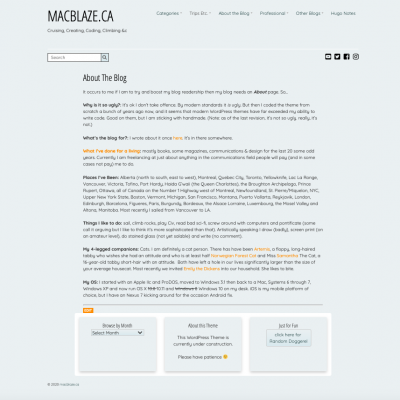 So while the look hasn’t changed much (except for some fixes/refinements I have been meaning to do for ages) the theme itself (now called MacblazeV) has been redone almost from scratch. My intent was to build it completely from scratch without borrowing any code MacblazeIV was built on a blank framework from Underscores  but this time I was trying to avoid that. In the end I did use some of their  functions for customization, but it was pretty minimal. 95% of this theme was done  from  a blank file—I am actually pretty chuffed with myself about that.

WordPress has gotten more and more complicated over the years and all the bells and whistles are pretty complex to implement. Because this theme is for personal use I was able to ignore a large part of that and just add the features I knew I would use.

I am not 100% about all the design elements at this point. As I said this was more about rebuilding the back end and getting rid of floats etc. So I will likely still be tweaking it for a while. But I am super happy with its responsiveness and and the overall structure. It will be much easier to modify now.

I still have to work on some technical issues regarding Instagram and some excessive resource use on the server, but that’s a separate subject.