That’s the day I baked my first loaf, 5 years ago, with sourdough starter I that I had barely got started — and that starter is still going strong. Here’s a post I wrote in January 2018 about the first couple of experiments using that starter. Spoiler: they were mainly duds.

My poor starter has gone though a lot: from being moldy, to almost starving after a months alone; it even made the journey to BC in air-cargo this past spring and I baked a bunch of loaves on board before bringing it home and reuniting it with the stuff that had sat neglected in the fridge for two month. Still, it has been 5 years and I guess the poor thing deserves some recognition on having made it through all that …as well as periods of me not baking much, a pandemic, a switch from white flour to rye flour, and back again—and then back to rye once more. It’s been almost dried, lived as a swampy sludge, underfed, overfed, developed some weird skins and spent a lot of time in the refrigerator beside the silk screen chemicals. But so far it seems it’s pretty impossible to kill.

And it’s made a lot of loaves along the way. Here’s some pics from over the years: 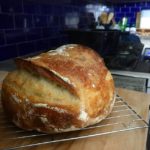 But it doesn’t really matter

The problem is that actually the bacteria/microbes in sourdough just don’t live that long. So really, the whole “old sourdough starter passed down for generations” thing is just a myth. But at least it’s a tasty one. Here’s a link to an article that explains the whole thing: https://www.bbc.com/travel/article/20220711-the-worlds-oldest-sourdough